The Thymio 2 robot is also for home

Today I will talk about the Thymio, an educational robot that many of you know and that can be found in many schools, whether in France or elsewhere in the world. Children who use Thymio 2 in school do not have to worry about how to tame it the very first time. The teacher has made his first experiments and will take care of the explanations in stages by accompanying his students in their first steps with the robot

But Thymio 2 is also a toy robot that amuses children a lot and that everyone can use at home. However, there is still a significant barrier for parents who are apprehensive about having this robot at home, understanding how it works and being able to use it with their children to make it a fun and family activity. This apprehension is understandable and yet this robot hybrid between toy and education is very easy to handle and understand.

As a testimony, I wished to share below the experience of a father who experienced this apprehension and quickly saw how comfortable his child was with these new robots and their use. A way to reassure and comfort you that the Thymio 2 robot is also for the home!

Find the original article in its entirety on the Borgione blog

Thymio, the robot toy for children

Some time ago, I had the opportunity to meet Thymio, a small, educational, mobile and very versatile toy robot, capable of stimulating the imagination of adults and children. Usually, my reaction to all technological products is a mixture of curiosity and fear: I immediately look for instructions, I find the Italian version and I start reading immediately like a geek. But as soon as I know how to turn it on, I say goodbye to the booklet and switch to self-taught mode.

A few days ago, thanks to my son and Thymio, I learned an important lesson: it is not a question of age, laziness or other trivial excuses, often we just have to think about looking at the world through the eyes of children, without filters or preconceived ideas. There is no reason to be afraid of these new robots and at the same time, we should not be too concerned about how our children will interact with these objects.

About a month ago, I showed Thymio for the first time to my son, who is just over three years old. I was really curious to see how he would react to this little robot that looks pretty neutral, but has predefined behaviors. My co-workers explained to me that, thanks to its settings, it works as soon as it is out of the box, without even having to program it. In fact, it's really inspiring for the kids to discover how he reacts. At that point, I think it's a little premature to try to use a robot with a three-year-old boy, especially with my three-year-old son. But I am waiting for a Sunday afternoon to proudly show my son the Thymio robot.

He looks at it, turns it over and turns it on in less than ten seconds. Like the first time with your smartphone and tablet. Like me, who grew up with the on/off button, he understands that this circular button provides access to the object and its controls. In fact, Thymio moves by himself and behaves differently depending on the color he has.

Thymio: a color an attitude

Now that he's green, he's your friend, you'll see he's following you. Try to put your hand next to him and let him follow you. My son puts his hand in front of Thymio and immediately tries to be followed by the robot, drawing, with some difficulty, a clear path.

We change to yellow and here comes the explorer Thymio, who goes straight ahead and changes direction in front of the obstacles. We spent the rest of the afternoon creating routes with balloons, shoe boxes, bottles in order to put Thymio in trouble or create a dead end from which he could not get out.

At some point, after almost two hours of walking and with my batteries and those of Thymio almost discharged, we attack the Legos and build a crane, or rather a ship. 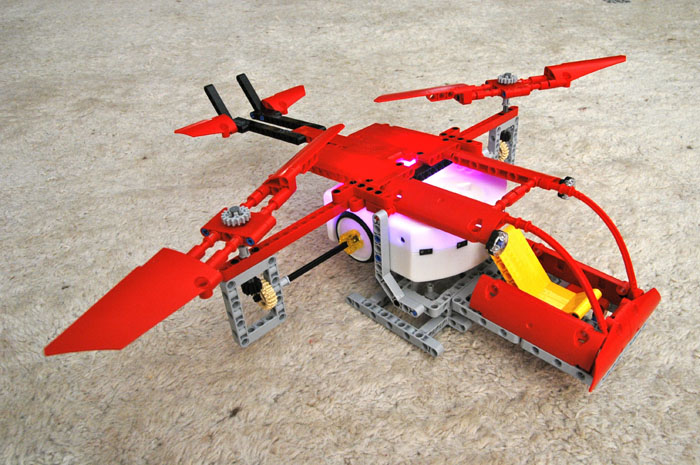 At the end of the day with a little peace of mind, I thought that my doubts about technology were actually related to both the adult's preconceived ideas, robotics unknown to me and products like the smartphone or tablet. In fact, I can say from my own experience that Thymio stimulated my son in a completely natural way.

Thymio at home: the results

My 3-year-old son saw and discovered Thymio in different ways:

He managed to do all this without an instruction booklet but just with his curious eyes, the few skills built and acquired during his short life and especially thanks to his mind, not overwhelmed by filters and fears often due to prejudice.

Thanks to this surprising afternoon with the robot Thymio, I look at the technology with less suspicion and try to be more curious and free of prejudices about these new educational robots and toy robots.

All Thymio robots on Robot Advance

If you too want to try the experience with the Thymio robot and your children at home, find below the robots that will help you. This article does not discuss the programming aspect, which allows us to go even further, but is perfectly explained step by step on the official Thymio website.