LEGO Mindstorms kits are one of the most popular educational tools for teaching robotics and programming. There is a third generation on the market (after RCX and LEGO NXT), Mindstorms EV3, which comes in two versions: 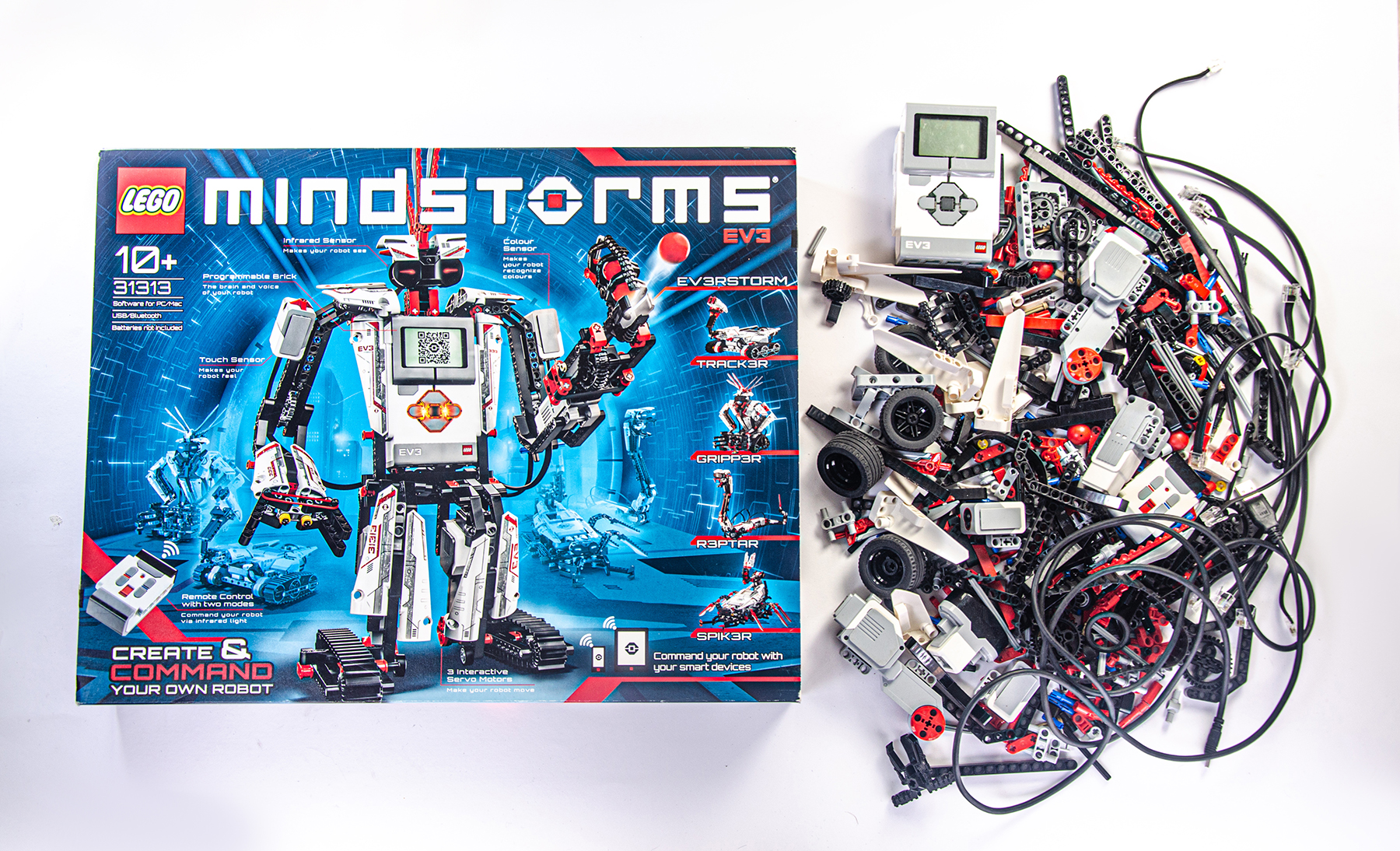 It is clear that decades of research and development were behind the success of the series. The popular LEGO Technic blocks, which work well to build various mechanisms, are mixed with specially adapted electronic parts such as motors, sensors and the intelligent brick that controls them. LEGO robots created from these elements can be programmed in a simple, child-friendly graphical programming environment.

The enormous possibilities of the set, combined with a simple construction system, make it one of the few sets that allow a complete robotics educational program (introduction, construction, programming, testing and playing) in a very short time: two hours of lessons can be enough. This has earned the series a well-deserved place among the best robotics teaching tools available on the market.

The LEGO Mindstorms EV3 Education LEGO set is packed in a large plastic box for organized storage of parts. The 13 compartment tray makes it easy to sort the blocks according to size and function. Underneath the insert there is space to store larger components such as wheels and tracks as well as electronics and cables.

Sorting makes it possible to build simply and quickly without having to throw the blocks on the table or on the floor. The building process is also quieter, which will be particularly appreciated by teachers who will use the Mindstorms EV3 educational set every day during classes. Inside the box, in addition to the 541 construction and electronics elements, you will find a list to help you sort the elements and instructions to guide you through the construction process. 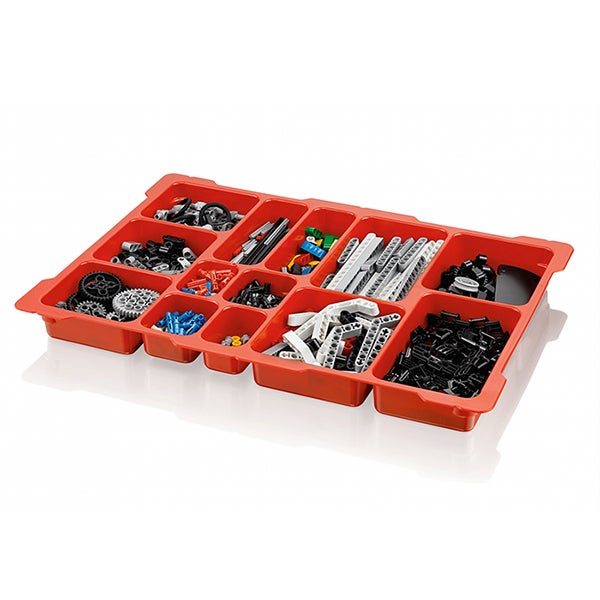 The LEGO Mindstorms EV3 Home set is packed in a disposable cardboard box, which unfortunately is not suitable for storing bricks. While in the case of most LEGO products a separate box is not necessary, things are different in the case of a robotic set which contains unique electronic and constructive elements. In this case it is important to have the appropriate packaging, which we advise you to purchase separately. The box and sorting tray (Same as the LEGO Mindstorms EV3 Education version) can be purchased from the LEGO Education website.

The packaging of the HOME set is made of cardboard. After cutting it out along the marked line, you will find a test mat on the back, useful for working with a colour sensor. In addition to the electronic and building blocks, the box contains a sheet of stickers that can be used to decorate some of the elements of the set, as well as an instruction manual for building a LEGO robot.

Contents of the LEGO Mindstorms EV3 Education and Home Kits

Both versions of the LEGO Mindstorms EV3 kit contain a large collection of LEGO Technic building blocks. But they differ in the number, type and even color of the blocks.

Of the 541 bricks in the LEGO indstorms EV3 eduction set, white and grey dominate, with small mixes of red, black and other colours. There are classic and straight Technic beams in 8 different lengths, 7 types of curved beams and two types of construction frames. LEGO Technic parts are available in a set of 5 basic colors (red, green, blue, yellow and black), making them ideal for use with a LEGO Mindstorms EV3 color sensor. The set also includes pins of 10 different lengths and 3 additional types of locking pins. 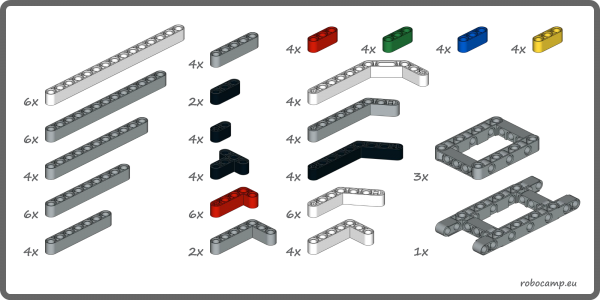 To connect axes, beams and frames, you can use 7 types of pins, including smooth pins and pin pins, which allow different connection resistors, and 18 types of connectors, including different pin axis connectors. Two types of spacers or sleeves can be used to lock or separate blocks along the axis. In addition, in the EV3 educational version you will find up to 10 types of pinions (straight and angular) and 2 small pinions. In total, there are up to 30 pads that can be used to create various gears. 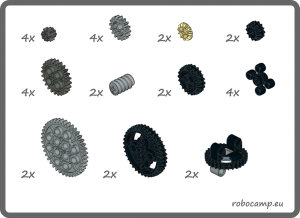 The Home version of Mondstorms EV3 contains 601 blocks. The most striking colour change and this home set is dominated by black blocks, with a mixture of red and grey. The colour white is reserved for decorative elements, such as parts of the housing.

The content of the set is similar to the Mindstorms EV3 Educational version. So you can find simple beams of 8 different lengths, 6 types of curved beams and two types of building frames. However, short beams dominate. There are fewer long beams, making it easy to create building frames. 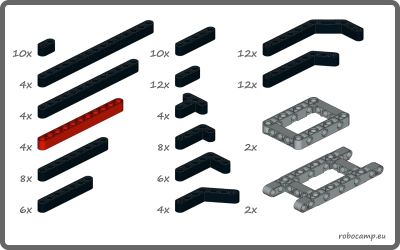 Normal axes are available in 6 lengths and there are up to 5 types of axles with blocks. For connection elements, LEGO offers 6 types of pins and 21 types of connectors. The unique elements of this set are axles, axles with a ball and the corresponding ropes in two lengths. The gears are available in 8 types, giving a total of 21 elements that can be used for power transmission. Most of them are angular gears. In this category there are no turntables, which are available in the educational version. 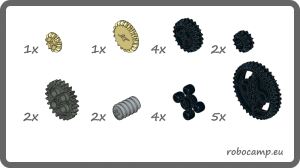 You can use four black rims with matching tires to create vehicles. Vehicle constructions can also be made using rubber tracks with good grip.

In the LEGO Mindstorms EV3 Home version you will find a lot of decorative elements.LEGO takes care of the quality, so that the plastic elements are almost indestructible. The LEGO offer includes a wide range of spare parts, which can easily replace missing parts in case of loss.

For the educational version, LEGO Education has prepared eight packages of Mindstorms EV3 spare parts available on Robot-Advance. Schools are advised to purchase a few in advance.

LEGO Education offers different types of accessories for the basic EV3 set. The most interesting of these is the LEGO Mindtorms EV3 Expansion Set, which includes 853 additional parts and significantly increases the capabilities of the basic set. Among the blocks in the expansion set, in addition to the beams and shafts that increase the size of the structures, you will find many interesting parts: 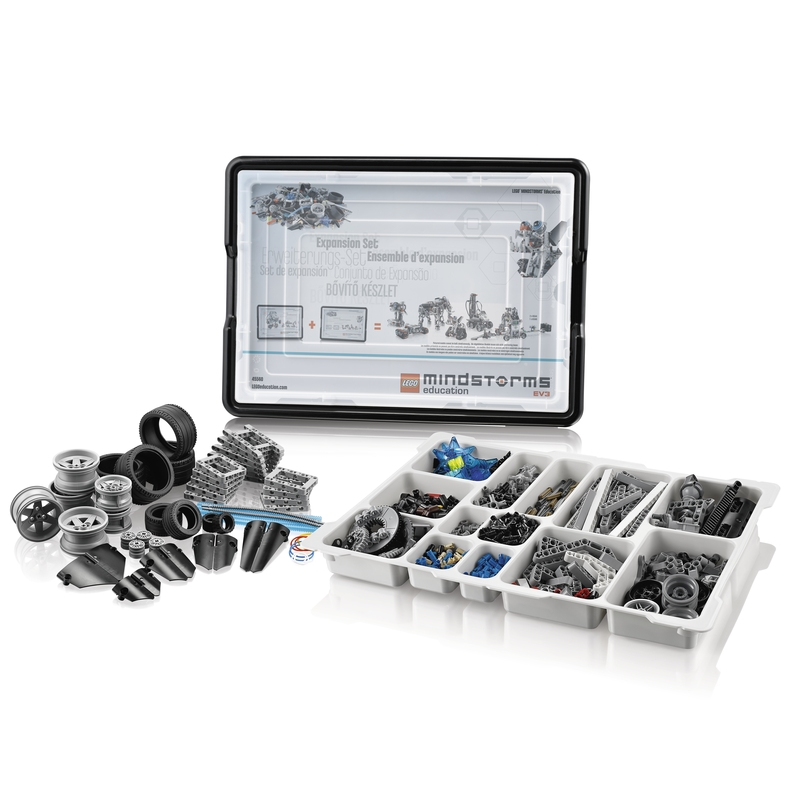 The extension set is packed in a separate plastic box of the same size as the basic set. Working with the two LEGO Mindstorms EV3 Education sets + Expansion therefore requires juggling with both boxes and therefore having space. After class, it is also necessary to separate the blocks into two separate sets.

Among the electronic parts, you will find in both sets :

Versions differ in number, types of components and technology used in the sensors. Motors and sensors are connected to the EV3 brick using cables with plugs. Cables are the only components that can wear out over time and it is therefore recommended, just like the spare parts, EV3, to have an emergency kit.

It is thanks to this LEGO Mindstorms EV3 smart brick that you will be able to control the LEGO robots built. It is a microcontroller based on an ARM9 processor with the Linux operating system, enclosed in a large LEGO block. The cube contains : 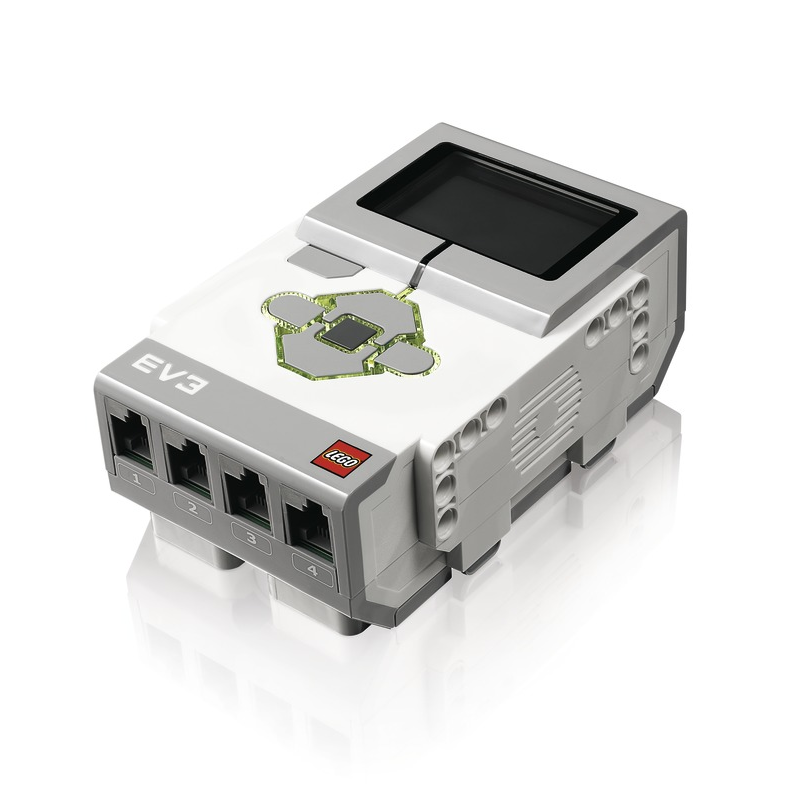 The smart brick allows communication via USB cable, integrated Bluetooth or WiFi (when an external WiFi module is connected to the USB port of the brick).

Each EV3 smart brick can be powered by 6 AA batteries (There is also a dedicated battery for the tray).

Both versions of the LEGO Mindstorms EV3 LEGO kit include two large LEGO servomotors and a smaller one. All motors have a built-in rotation sensor. This allows coordination between the two motors in the side drive and precise straight driving. The readings from the rotation sensor can also be used in programming (e.g. as control levers). In both types of servomotors, the rotation control is very precise (to the degree) thanks to the integrated tachometer.

Larger motors have a higher power output and a large rotating head. They reach a speed of 170 rpm. A smaller motor allows higher speeds (up to 250 rpm) at the expense of available power, and its small size makes it easy to integrate it into the construction of your LEGO robots.

The LEGO Mindstorms EV3 contact sensor is included in the EV3 Education and Home versions. It is a simple analogue sensor that can detect whether a button is pressed or released. It can be used to start or stop construction, build bumpers or count clicks. With the EV3 Intelligent Brick's 5-button paddle, it can be used to program an advanced LEGO EV3 building control system. 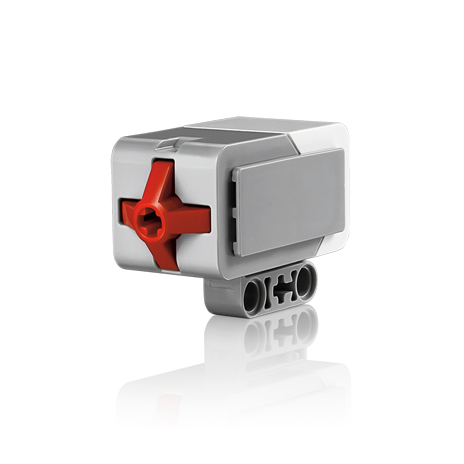 This LEGO Mindstorms EV3 color sensor is also available as a home (31313) and educational (45544) version of the LEGO Mindstorms EV3 kit. The sensor collects data on color (8 different colors) or light intensity (ambient or reflected beam). It can be used in line-tracking robots, sumo wrestling or sorting devices.

The Mindstorms EV3 gyro sensor is only available in an educational version of the Mindstorms EV3 LEGO kit. Consisting of a group of accelerometers, the electronic gyroscope measures angular position and is used to detect changes in the position of an object with an accuracy of 3 degrees on all axes of rotation. It can be useful for creating balancing robots or controllers that react to pitch. 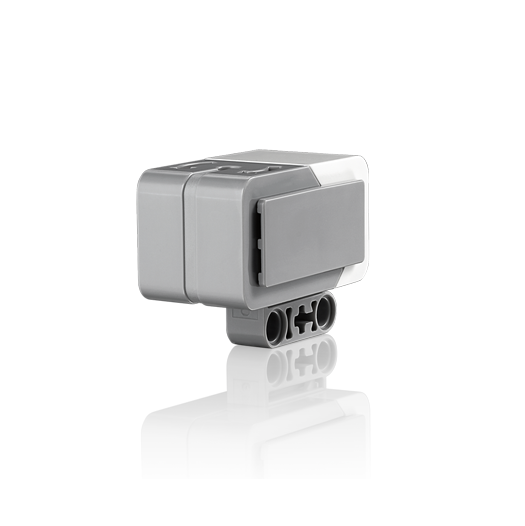 Different technologies in different versions of the set are used for distance measurement. Discover on Robot-Advance the EV3 Infrared sensor to be associated with the infrared beacon for distance analysis.

LEGO Mindstorms EV3 LEGO kits can be programmed using a dedicated application based on LabView. It is available for computers and tablets. Not only does each version of the kit have its own software version, but the application differs depending on the programming device used (computer or tablet). 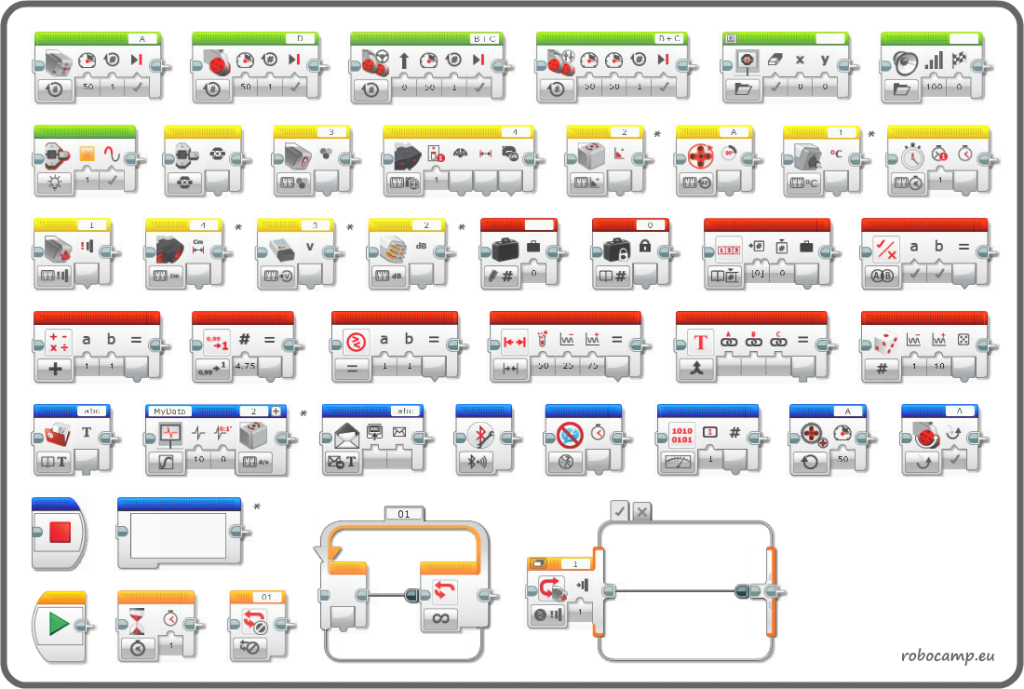 Text mode programming of EV3 robots can be introduced at higher stages of education. You can choose between the dedicated EV3Basic or Robot-C languages, or even one of the classic programming languages, such as Java or Python (after installing a new operating system on the EV3 intelligent brick).
The brick connects to your computer or tablet via Bluetooth, WiFi (when an external WiFi module is connected) or simply via a USB cable. After downloading the program onto the EV3 brick, the USB cable can be unplugged and the robot will operate autonomously.

Programming the EV3 sets with computers gives you the most possibilities and allows you to make full use of the sets. In both the educational and family versions of the application, you will have access to the full range of programming blocks, grouped into six categories. There are action blocks (control of motors, display or illumination of the EV3 brick keys), flow control (waiting blocks, conditional instructions, loops), reading of sensor data, data operations (variables, lists, mathematical operations), advanced blocks and those created by the user.